In a world where everything is made of white paper and black ink, funny cars compete in adventurous and odd races, in which anything, absolutely anything, could happen… even the intervention of “a hand from above!”

The transmedia project B/W Races is original and up-to-date but with a long-term potential.
It was born from the stop motion short of the same title, produced by Cicciotun in 2010. The success of the short, especially regarding a pre-school audience, led us to consider expanding it to other media. And further, we think that the quality of the visual design and the possibility of multiple levels of contents also make the series attractive for an young and adult audience.
The mood, the simplicity of the language and the visual immediacy, make B/W Races – The Series an exportable production that can speak to anyone, without dubbing or translation.

THE SHORT THAT INSPIRED THE SERIES

THE SHORT THAT INSPIRED THE SERIES

B/W Races – the Series, tells the wacky adventures of a car race. Three white cars race at full speed, trying avoid the traps of a wicked black car, the inevitable villain, who tries by any means, licit or not, to put them out of play.

With a few basic elements, many gags and unexpected situations, it shows the conflict, the paradigm of the dialect of opposites: white and black, good and bad, victory and defeat.
But the line is thin when the game seems to be over, an hand in the flesh suddenly appears. This is the unique extraneous element in the paper world. The hand draws, erases, reshapes all the elements in the game. As a manufacturer on a toy model, it inverts the roles and the intent of the characters, alters the story and turns the expected ending into an unpredictable coup de theatre.

Each episode is self-contained and at the end, unexpectedly, an intervention of the hand brings them back to the starting situation.

The series, it’s a stop motion animated series. Every element is made by shaping, die-cutting and modeling with paper and cardboard in order to build simple figures such as cubes and parallelepipeds.
The mood is admittedly handcrafted and it highlight the materiality of the paper and of the other instruments used in the production of the series. This gives a warm mood, without being cheap or unsophisticated. The hand, with its rosy complexion, is the unique touch of color, and so it’s a visual and narrative breakage element.
The visual design with simple geometric figures and cartoon drawings, outlines the action, emphasizing the playful and funny mood. Coherently the editing has a dynamic and catchy rhythm, the same we can find in the car races as well in the comedy.
Also the soundtrack and the sound effects follow a handmade and playful approach. All the sounds are made using the “voices” like in the toy car races of children.

B/W Races – The game is a strategy-racing game for tablets. It has the same mood of the short and it offers an original and unusual gameplay experience compared to traditional the racing games.

B/W Races, indeed, is not a standard racing game: the player doesn’t drive cars, he drives the race, interacting with the cars to change the expected ending of the race. Everything only tapping on the tablet.

Also the game is black and white in order to keep an unconventional stylistic choice.
The animations are in 2D / 3D but they keep the same visual taste and mood of the short.

The game offers many possibilities for customization and social sharing.

Download the postcard and craft your B/W racing car! 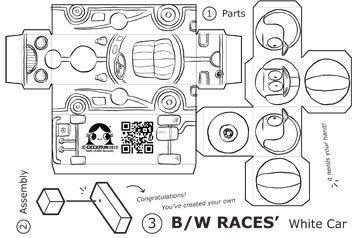