Duels, ambushes, chases, heroism and magic with a pinch of humor for a fantasy saga very… tasty.

By now the people of Freezerdom have been living in peace and prosperity for a few centuries. Thanks to the construction of the Totem of Ogg, they have been able to keep away from the threatening Ara-Migal, the terrible fods that strike their world bringing destruction every thousand years.

One day, however, troubling news begins to surface in the northern regions. The Tartars of the Harsh Provinces, from shepard myths, are unexplainably transformed into blood-thirsty pillagers.
Not event having time to resolve this mystery, another much more upsetting event shakes Freezerdom: from the sky rains a thirteen year old girl named Leeka Bes, and everybody assumes that she belongs to the lineage of the Ara-Migal. The surprise and anguish that distress all of the people of Freezerdom are not lesser thank Leeka’s bewilderment. Leeka has very few memories before waking up in this stranfe world and they are rather than absurd: she sumply went in the kitchen for a midnight snack, opened the refrigerator… and suddenly got swallowed inside!

For Leeka, an eccentric journey starts filled with traps, and as she attempts to save herself and the inhabitants of Freezerdom from a ruthless and very uncatchable enemy: Mrgra Taht, “the creature that taints all”…

An unconventional and modern fantasy saga: an adventure filled with duels, ambushes, heroism and magic, with a pinch of humor.

26 episodes to tell the eccentric journey of Leeka and Freezerdom inhabitants in their attempts to save themselves from a ruthless and very uncatchable enemy: Margra Taht, “the creature that taints all”. 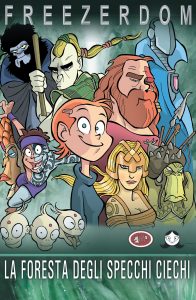 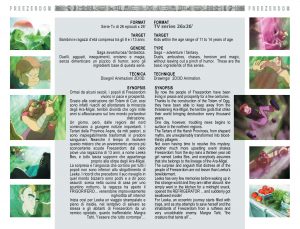