Ceramic art meets animation in the urban space and in the virtual world.
A timeless and limitless experience of craft and movement

Keramotion is a multimedia art work, a new format that combines the materiality of ceramic art with the movement of animation. A permanent art work but in a continuing movement.
Sequential drawings are painted on the ceramic tiles that become the frames of an animated movie distributed online. The tiles are then displayed in sequence on a city wall to make up a permanent art installation that will furnish the city. In every city a new art work telling a new story linked to the host city and dedicated to the citizen audience of all ages.

The pilot project of Keramotion is designed for Genoa and will be set at the Giardini Luzzati, a location in the city center with an historical and cultural appeal.

The story is based on the legend that tells that the name of Genoa derives from Giano Bifronte. The city just like the Roman god has two faces: one facing the sea, the other looking beyond the mountains that surround Genoa. The story has a palindrome development and can therefore be read indifferently in both directions. The outputs will be to two animated shorts accessible through a QR code.

Ganù studio by Cristina Clelia Cambiganu, the association “Arti, luoghi e visioni” and the Culture Department of Genoa city and it’s produced with the support of the Fondazione Compagnia di San Paolo. 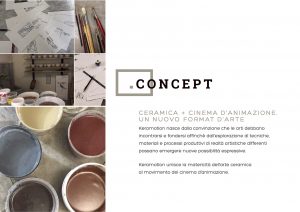